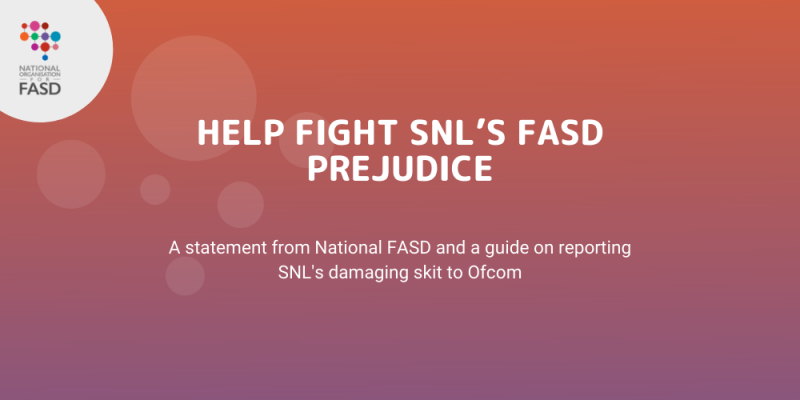 On Saturday 15th January 2022, the American sketch show, Saturday Night Live (SNL) aired a skit called “Winter Formal” in the US. In the skit, a boy is mocked for various character traits and marketed as a sexual deterrent for hire to parents of teenage girls. The character traits used are a profile of someone with FASD, and the boy’s mother rounds out the skit by saying that she drank during pregnancy.

The skit aired in the UK on 16th January, on a branch of the Sky network, and is due to air again 21st and 22nd January, as well as being available on YouTube.

As those who have seen the skit will agree, its content is wholeheartedly offensive and ableist, and why it made it to air at all is a mystery. Below is:

We are registering complaints wherever we can as an organisation, but the more voices can be heard the better, so please, if you have the time, follow the guide below and make Ofcom aware of the scale of harm that this piece of SNL’s content has caused.

A statement from National FASD

FASD is no joke.

The National Organisation for FASD calls on Sky Comedy to immediately cease streaming of Saturday Night Live, Season 47, Episode 10, in order to protect the public from offensive and potentially harmful content. This is due to inclusion of the skit “Winter Formal” which mocks a young man for his disability due to prenatal alcohol exposure.

The script is prejudiced and humiliating to any person with a disability. Not only is it a violation of the dignity of those affected by prenatal alcohol exposure, it also dangerously fuels the discrimination, stigma and blame that keep far too many women who might have consumed alcohol in pregnancy and those individuals and their families who are concerned about FASD from coming forward for the support and diagnosis they need and deserve at home, at school and at work.

National FASD calls for responsibility in media in portraying the risks of alcohol in pregnancy and how they represent people with FASD. In a year when the UK television industry is putting disability at the top if its diversity and inclusion agenda, it is a misjudgement to broadcast a comedy programme that mocks a hidden disability such as FASD.

Nyrene Cox, an adult with FASD, said, “They were belittling their son because of how he is ‘different ’ I didn’t like it…It’s discrimination to all those who have additional needs and see themselves as being different or not socially accepted. People with FASD need to be supported in all aspects not have uneducated people discriminate them. it’s not ok to laugh about drinking in pregnancy.”

Janet Griffin said, “How dare Saturday Night Live make light of a mother who like me has unknowingly caused their baby harm through drinking alcohol without knowing the damage it could cause. My son is living with FASD daily. I do not make light of his disabilities and in contrast to SNL’s horrifying insults he is a fully qualified makeup artist.”

Prof Raja Mukherjee, consultant psychiatrist and lead at the National FASD Service said, “Demeaning someone with a disability is unacceptable and fundamentally wrong. Also, it is an insensitive portrayal of many birthmothers who have unintentionally caused harm and suffer significant grief. Rather than blaming and ridiculing, we should be supporting them with the grief process and how to then best support their children going forward. This portrayal is an unsophisticated way of creating humour at the expense of people who are vulnerable and only continues to perpetuate a myth of what is FASD and also increases the stigma that so many people have worked hard to remove.”

National FASD’s Chief Executive Sandy Butcher said, “The segment has created distress within the FASD community. We stand with people with FASD and their supporters here and around the globe who call out NBC, Sky and all those very many people who brought this show to air for this inexcusable skit. We are available to provide information and training. And we’re here for those viewers who may have been hurt by this skit. You are not alone. You can contact us via www.nationalfasd.org.uk.”

Reporting the skit to Ofcom

2- Click on Complain about TV, radio or on demand services 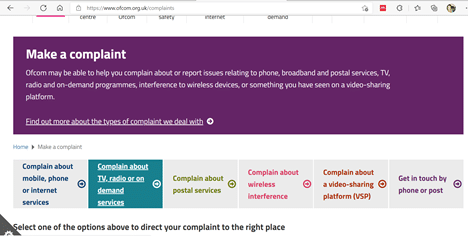 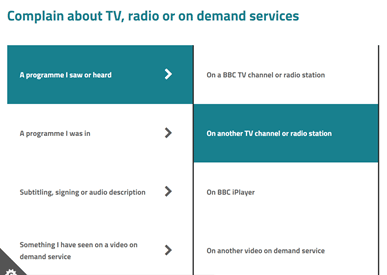 5 – Fill in the programme details as shown below

You could include in your complaint some of the following phrases:

7 – Fill in your details

Despite abhorrent material such as this, we’d like to remind you of the amount of progress that has been made with regard to FASD in the UK, and we’ll be publishing a blog soon about why we believe 2022 will be a particularly momentous year.

Thank you for joining us in this action, and please don’t be disheartened, change is coming. 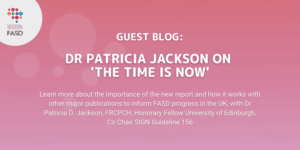 Dr Patricia Jackson on ‘The Time is Now’

A guest blog post by Dr Patricia Jackson I am writing from my base in Scotland, and it has been a real pleasure to be 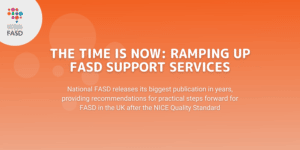 The Time is Now: Ramping Up FASD Support Services

On Monday 21st of March, at the National Liberal Club in Westminster, we unveiled The Time is Now: The National Perspective on Ramping up FASD